During this past three months, volunteers and release staff with USW, MSEA SEIU 1989, IAM, CWA, APWU, AFGE and UFCW  knocked on over 12,000 doors and made over 18,000 calls to convince other union members and the voting public to support Governor Mills and State Senators in six targeted races.

In those six Senate races, five of our endorsed candidates won, including Senator Troy Jackson (Allagash), Chip Curry (Belfast), Craig Hickman (Winthrop), Tim Nangle (Windham) and Joe Rafferty (Kennebunk). The Maine AFL-CIO was one of a small number of groups in Maine with a door-to-door canvassing team.

There’s no doubt union members made a big difference, especially for candidates who won by thin margins. For instance, in Senate District 1 where Troy Jackson won by 608 votes, union members made 4,175 calls and canvassed nearly 2,500 doors. Jackson expressed how important it was to have union boots on the ground during the midterm election season.

“I think union people understand the struggle for working class people to get fair representation. They understand the rights they deserve and they can talk intelligently about what's happening at the Legislature. They are passionate in talking about their candidates and working class issues,” said  Jackson. “It just makes people feel much more like this person is sincere and that sincerity translates over into a favorability for the candidate." 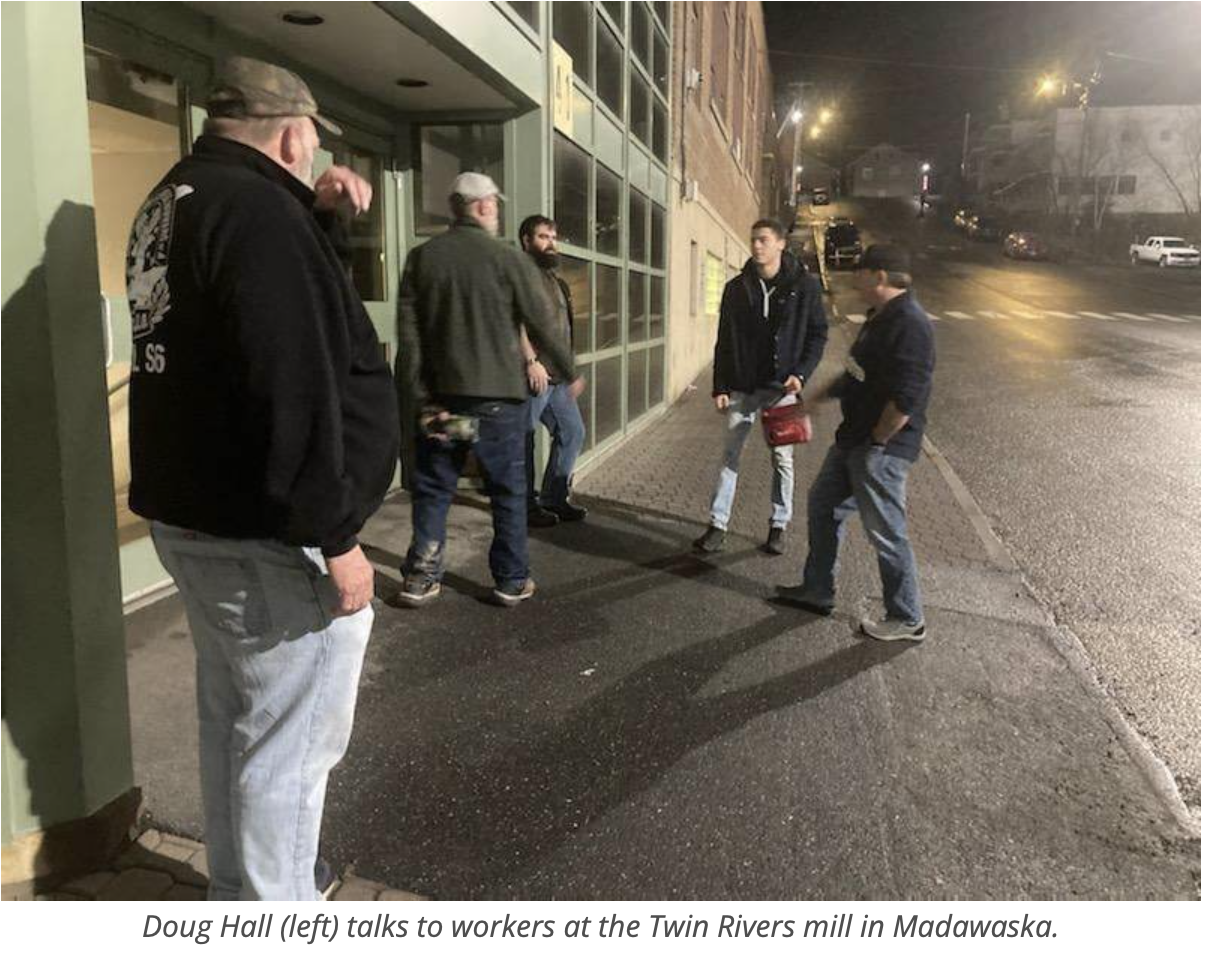 Shipbuilder Doug Hall (IAM S6), who spent a lot of time pounding the pavement in Madawaska and other parts District 1 said it was the easiest job he’s ever done.

“Troy is an easy sell and it was obvious he had the backing of his constituents from the years of work he has done for the County,” said Hall. “It was obvious that people weren't listening to the attack ads.”

Hall said voters remembered Troy's involvement in the 1998 logger blockade at the Canadian border, which first energized him to get involved in politics. He even ran into a union welder he knew who had recently quit at Bath Iron Works and had moved home to work at the paper mill in Madawaska.

“He gave me a big hug and says ‘what in the hell are you doing up here?’ He remembered Troy from when he stood with us on our picket line in 2020,” said Hall. I told him I'm up here to help Troy and that's what we should do to help those who help us. He agreed.” 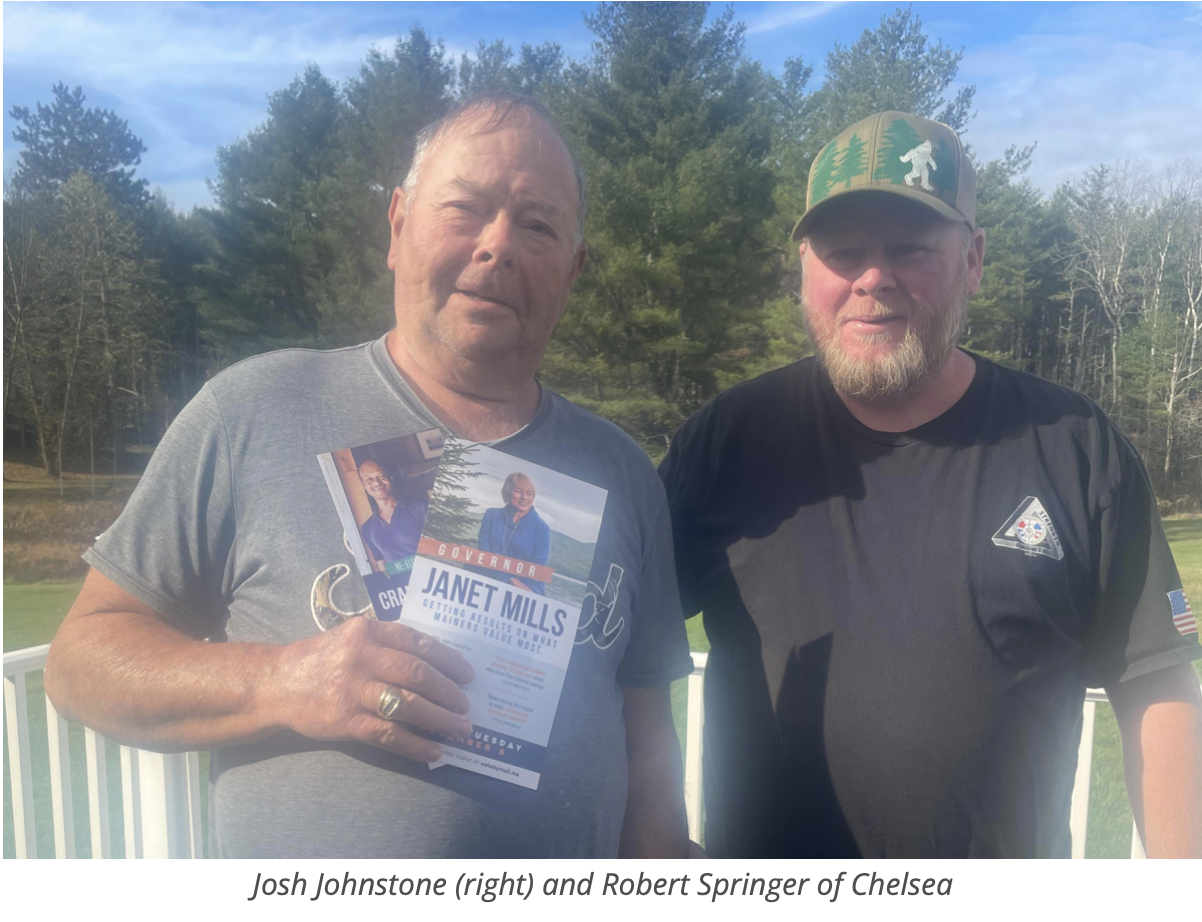 From the beginning, it was clear that Caribou would be a challenge for Jackson as his opponent lives there and is well-known, but union canvassers said Caribou voters were very grateful to learn about Jackson’s efforts to save the local Veteran’s Home there from closing.

“I actually talked to one voter who was undecided in the Senate race, but once I told him about what Troy had done to save the Veteran’s Home, he told me, ‘My brother is in there. I will definitely support Troy. I didn’t know that,’” said IAM S6 member Josh Joshstone, who also canvassed for Senator Hickman.

CWA 1400 member Robin Rice had a similar experience calling one of Jackson’s constituents in Aroostook County.

“I spoke to a woman whose mom had terminal cancer and had been living in the Veterans Home for years until it was about to be closed down,” said Rice. "She was so grateful to Troy Jackson for fighting to keep it open. Her mom was able to live out her last days in the comfort and safety of the home she’d known for years because of him.”

Sometimes it could be difficult for canvassers to figure out if voters agreed with them because Aroostook County people are famously hospitable and friendly to strangers, regardless of their political views. Some playfully tried to dupe the canvassers, like when Johnstone came upon a couple getting into their Side-to-Side to take a ride at the end of the day. After introducing himself and stating his purpose, the man promptly got out of the vehicle.

“Troy Jackson?!” he exclaimed as he angrily spat on the ground.

Union canvassers also got an intimate picture of the stark class divide in Maine, from shorefront mansions to barely habitable shacks. It was reinforced how critical it is to raise expectations and empower workers to fight for an economy that works for everybody, not just those who live wealthy enclaves.

MSEA retiree Jane Gilbert — who canvassed from Winthrop to Isleboro up to Fort Kent— described the experience driving to voters' home as “the depths of despair to the heights of joy." While said she and fellow MSEA retiree Steve Keaten had hundreds of meaningful conversations with voters about the importance of voting and having a say in our democracy.

“At least two or three times every single day somebody would say, 'Thank you. What you’re doing is very important. I really appreciate it," said Gilbert. "That really gins you up and makes you feel like you’re really accomplishing something. I had done doors before and that had never happened to me.”

She recalled how good it felt that one man living in a tiny camper enthusiastically supported the pro-labor candidates and understood how important it is to have leaders who support everyday people. Gilbert stressed that elections should not be a spectator sport and it is very important for everyone to participate, whether it’s calling voters or knocking on doors.

“I would like readers to know that it is our obligation as union members and as citizens to get involved and talk to people about our elections,” said Gilbert. “We’re not going to be able to continue doing this stuff unless everybody gets involved.”

Rice said she was very grateful for the opportunity to be released from her regular job to make calls for her union.

“I looked forward to making the calls every day because I know I’m doing meaningful work,” said Rice. “This sounds so cliched, but looking back on the past eight weeks, it truly has been an enriching experience…No lie. I’ll be sad to go.”