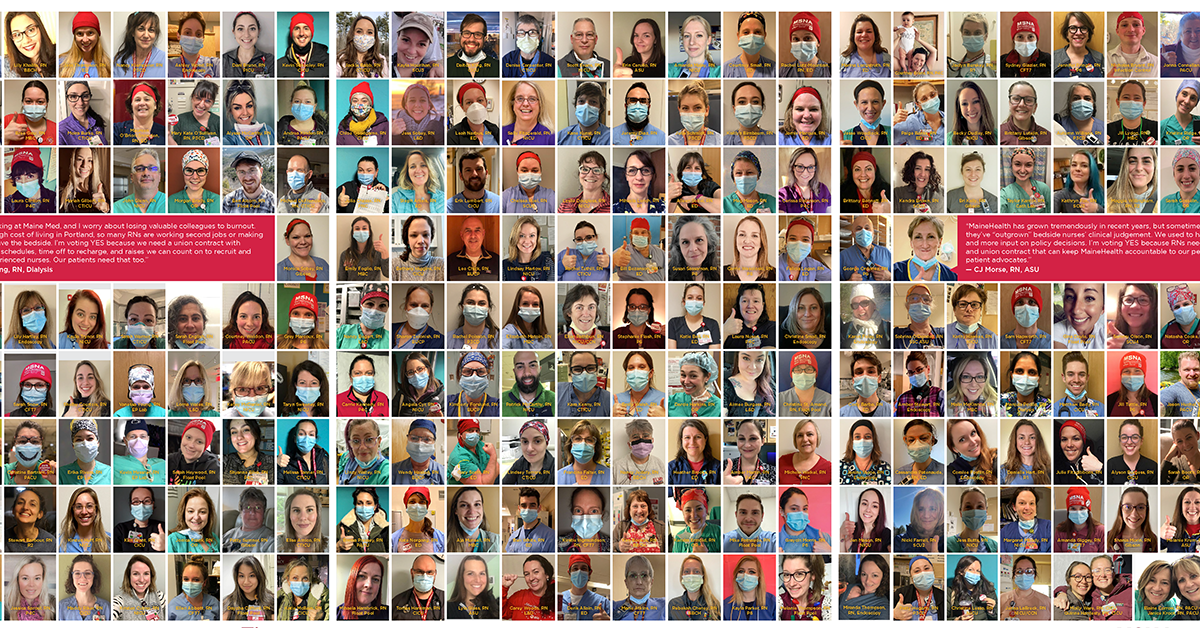 Registered nurses at Maine Medical Center (MMC) voted overwhelmingly to unionize and join the Maine State Nurses Association/National Nurses United. The Maine Med RNs voted 1,001 to 750 in a mail ballot election counted by the National Labor Relations Board, to form their first ever union. MSNA will now represent nearly 2,000 RNs at Maine Med, the Scarborough Surgery Center and the MMC Brighton Campus in Portland.

“This is a dream come true, to bring us the unified strength we need to improve patient care conditions and workplace standards at Maine Med,” said Maine Med Mother Baby RN Jackie Fournier.

The RNs cited growing concerns about inadequate staffing, mandatory scheduling that requires nurses to rotate between working days and nights that they say leads to burnout and fatigue, lack of meal and break relief, assignments to work in units for which they do not have clinical experience and proper orientation, and other workplace improvements and standards.

“We are thrilled to welcome Maine Med nurses to the labor movement. Their solidarity, courage and strength throughout this pandemic and in the face of an expensive, divisive anti-union campaign by hospital management is remarkable and an inspiration to all workers,” said Cynthia Phinney, president of the Maine AFL-CIO. “This is a historic union victory at the largest hospital in northern New England. We hope other health care workers in Maine will become inspired and organize together to win a voice in their workplaces.” 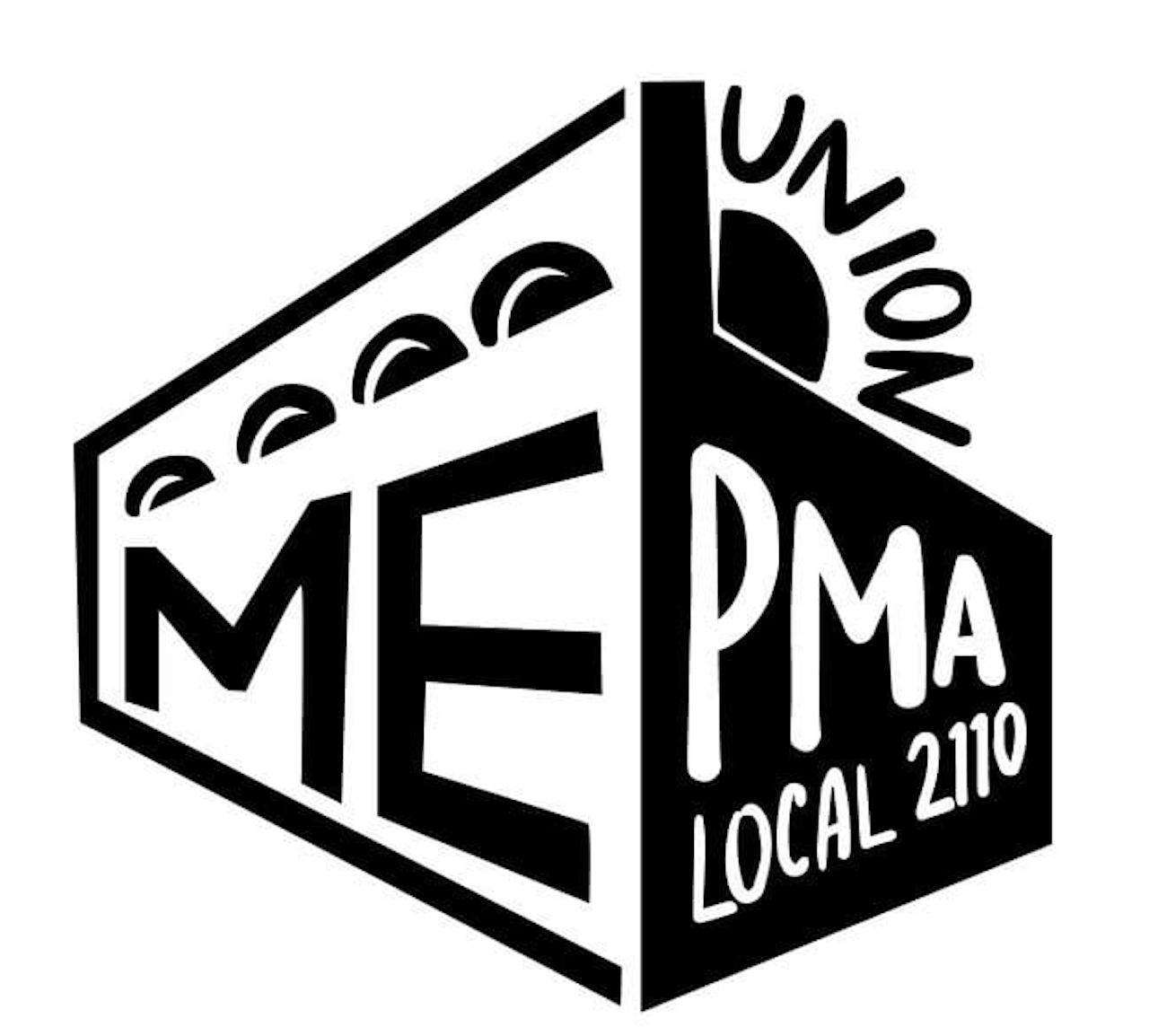 “We won! The votes are in and a majority of PMA staff voted UNION YES!” museum workers tweeted last Thursday. “We are grateful for all the support we’ve received throughout this process, and look forward to working with all of our colleagues to build a stronger and more sustainable PMA!”

It was a hard-fought organizing drive as management waged a ruthless anti-union campaign, resulting in a series of layoffs, which workers claimed was a result of their pro-union activity.

“The ballots were at long last counted in a union election whose results had been held up because of the Museum’s legal appeal to the [National Labor Labor Relations Board] in Washington, D.C.,” Maida Rosenstein, president of United Auto Workers Local 2110, told the Portland Press Herald. “The union won the election and will now be certified. We look forward to bargaining a contract that will allow staff to address their working conditions at the Museum and have a democratic voice in their employment.”

A museum spokesman told the Press Herald that the museum accepts the results of the election and is looking forward to bargaining in good faith with Local 2110. 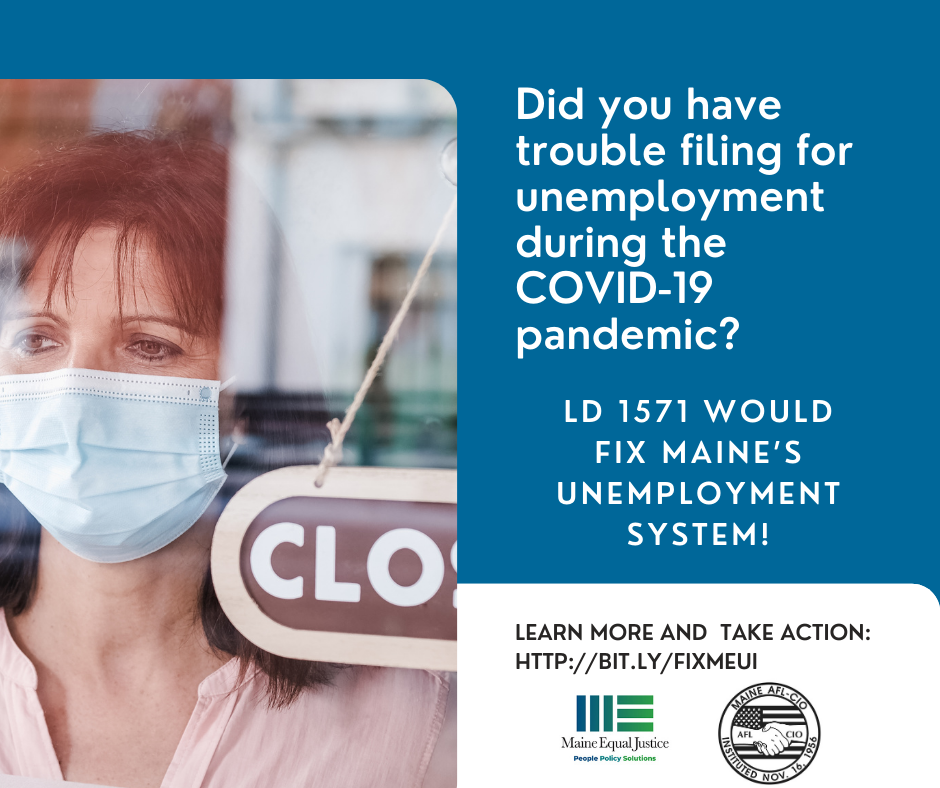 The COVID-19 pandemic has revealed that the state unemployment system needs to be strengthened and improved. The Maine Legislature’s Labor and Housing Committee will be holding a public hearing on LD 1571, “An Act To Strengthen the Unemployment Insurance System To Better Serve Maine Workers,” on Monday, May 3, at 9am on Zoom.

Click here to send an email to your Legislators  and Governor Mills asking them to support LD 1571!

LD 1571, sponsored by House Speaker Ryan Fecteau, comes directly from the experience of Mainers laid off during the pandemic. It will modernize Maine’s unemployment insurance program to ensure that Maine workers will receive timely and adequate unemployment benefits and that our system runs smoothly to help people get back on their feet.

If you would like to testify on this bill, please email andy@maineaflcio.org and we will give you all the information you need to register and testify on Zoom.

Maine May Day Rallies for Workers' Rights - Saturday, May 1st 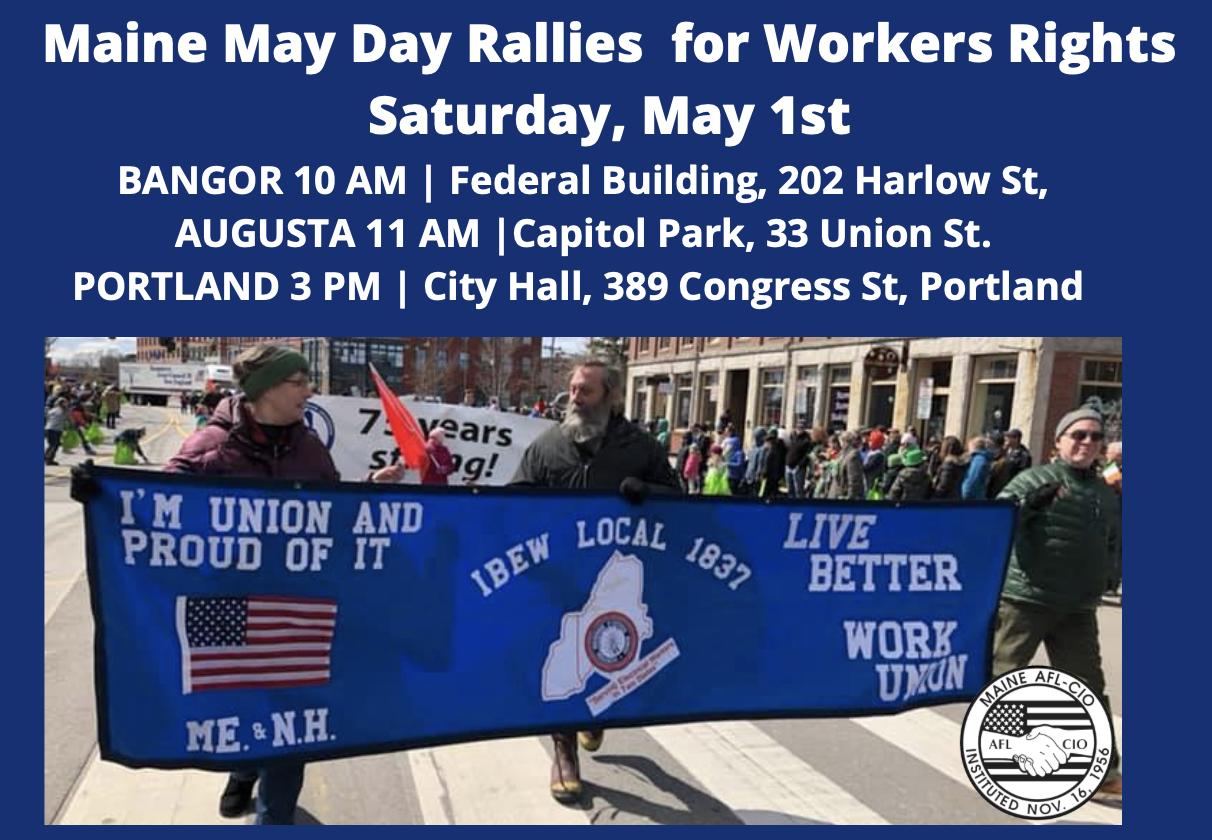 This Saturday, May 1, Mainers will join workers across the world in celebrating International Workers Day at rallies in Bangor, Augusta and Portland. We'll be calling on Congress to pass the PRO Act, to strengthen workers' rights and allow working people to band together to form unions to better their lives. Please share this Facebook event for the three rallies with all of your friends. Bring your union banners and we'll see you there! 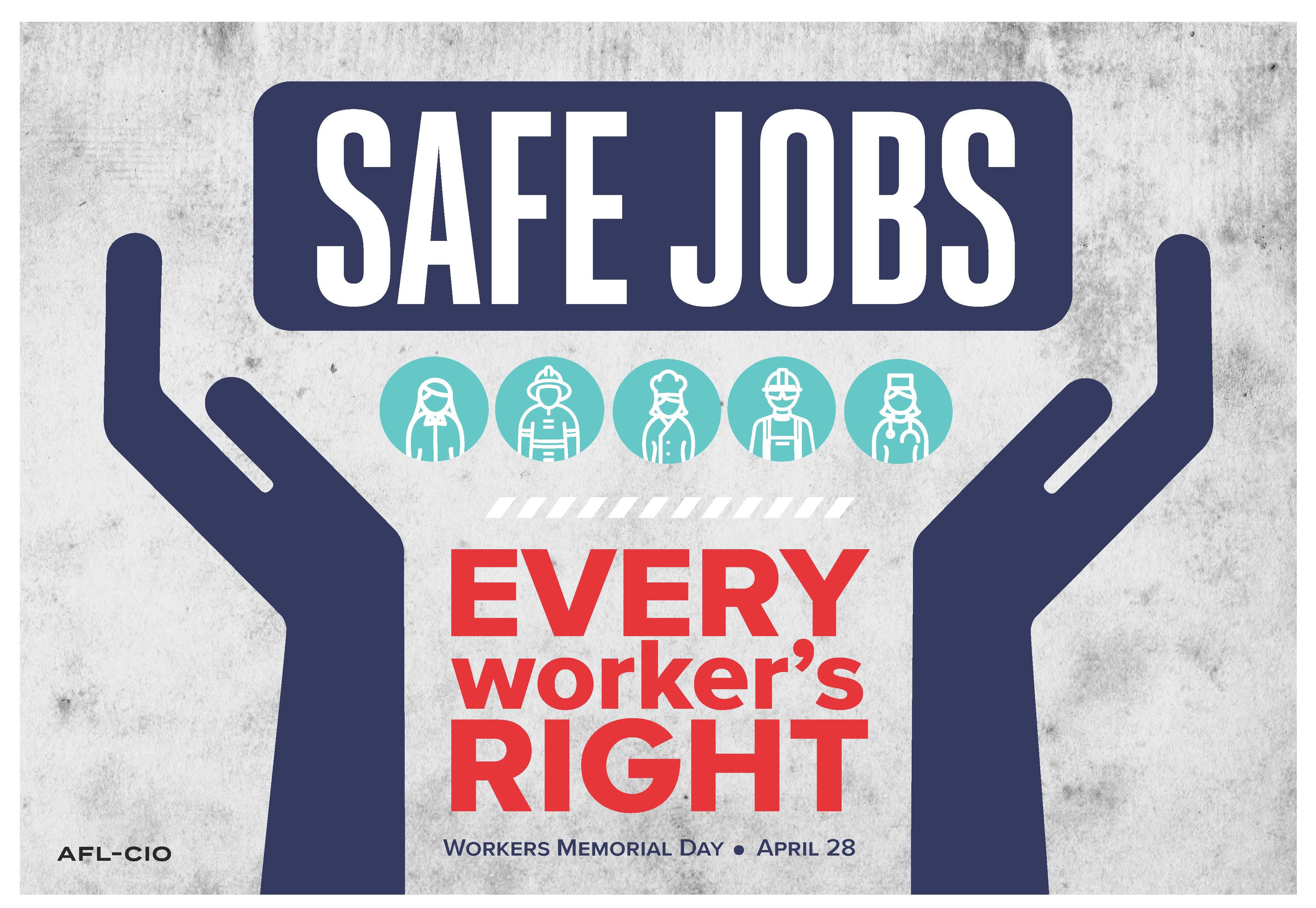 Western Maine Labor Council held its virtual Workers' Memorial Day and May Day commemoration on Sunday, April 25 to honor the Maine workers who have passed away as a result of workplace-related injuries or illnesses.  Worker Memorial Messages were given by: Senior Advisor to the Assistant Secretary of Labor-- Ann Rosenthal; and our own Dr. Nirav Shah.

The Bruce D Roy Award given to someone who dedicates much of their lifetime to strengthen the lives of working people was presented to John Martell, long time president of the Professional fire fighters of Maine. The Workers Solidarity Award, given to an individual, union, or organization for advancing the interests working people through organizing and collective action went to Preble Street Workers United MSEA-SEIU, Local 1989; and was accepted by Leslie Torkelson. The Frances Perkins Award given to an individual who improves the lives of workers through public service was presented to Congressman Jared Golden.

The event culminated with a prayer for the fallen given by Rev. Holly Morrison Pastor of the Phippsburg Congregational church followed by the scrolling of the 42 names of fellow Mainers who lost their lives due to workplace injury or illness in 2019 and 2020.  You can watch a video of the event on the Western Maine Central Labor Council Facebook page. 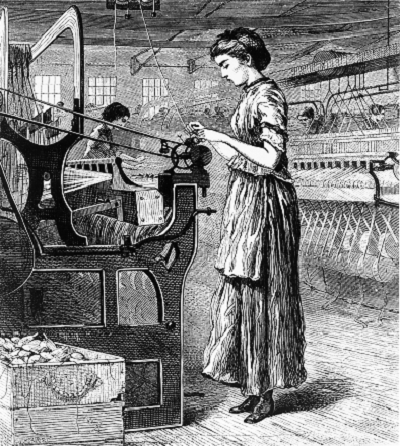 “Maine probably furnishes more female operatives for the factories of Massachusetts than any other State. Very many of them are the daughters of poor parents, compelled by land monopoly to enter the factories to procure a living,” wrote alt journalist Jeremiah Hacker in the Portland Pleasure Boat on April 19, 1849.

“There are hundreds of young females shipped from this State every year to the factory prison-houses, like cattle, sheep and pigs sent to the slaughter.... Every steam boat and car that leaves this State for Massachusetts carries more or less of these victims to the polluted and polluting manufacturing towns where they are prepared for a miserable life and a horrible death in the abodes of infamy.”

In the 1830s, thousands of New England women flocked to textile mills in Massachusetts and New Hampshire with the promises of good wages to help support their families. For the mill owners, these young women were a lucrative and cheap source of labor as many had experience weaving, could be “easily controlled” and were paid less than men. As early as 1831, Maine women were recruited from their farms in rural Maine to work in the mills of Lowell and Nashua, New Hampshire. By the 1840s, the Lowell mill had recruiting agents in Portland, Bangor, Gorham, Saccarappa (Westbrook), Orono, Hallowell, Bath, and Gardiner.

As the late historian Charlie Scontras noted, these mill agents “undoubtedly helped to evangelize the interests of the industry. Marketed romantic images of textile life would be transformed into something less than a workers' paradise and milll life and work became targets of labor organizers and reformers.”

In the 1830s and 40s, women textile workers in Lowell Massachusetts organized, formed the first union of American women workers and went on strike to protest cuts in their wages and gruelingly long hours of up to 13 hours day in he loud, cramped and lint filled mill. Although the strikes failed due to the power and influence of the mill owners, the Lowell workers didn’t give up. They formed the Lowell Female Labor Reform Association in the 1840s to petition and lobby the Massachusetts government for shorter work days. While the women could not legally vote, they proved to be a strong political force and helped strengthen the burgeoning women’s rights movement.