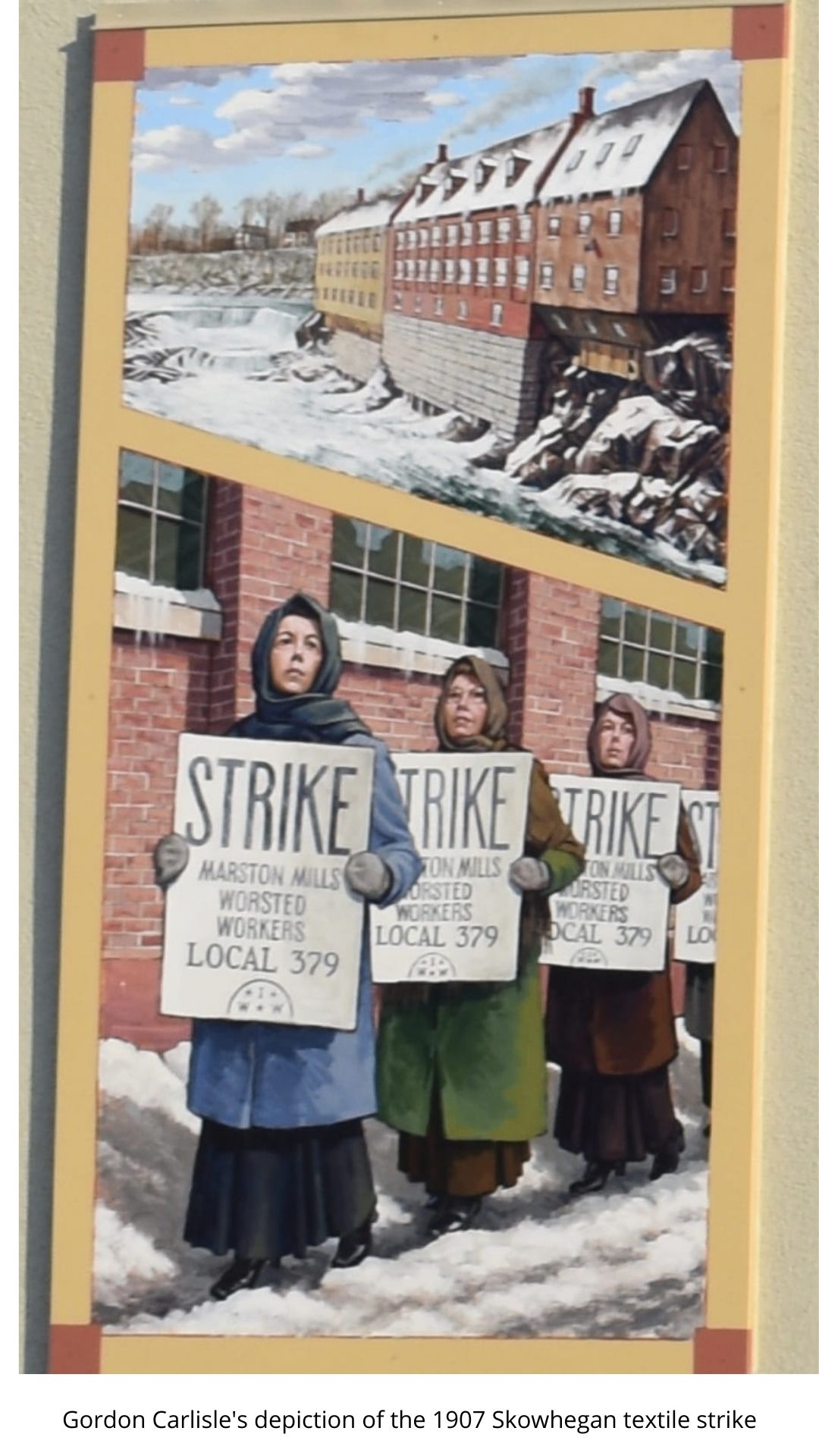 Artist Gordon Carlisle of Eliot has created a new mural that includes a panel honoring the 225 union textile workers who went on strike at the Marston Worsted Mill on January 21, 1907. The mural is being installed in downtown Skowhegan on the SPACE on the River, LLC.

The Wesserunsett Arts Council, which commissioned Carlisle's mural along with two others, will be holding a mural project opening at 5 pm on June 4th, starting with a tour of the three murals in the municipal parking lot at Hight Chevrolet.

Carlisle’s mural features log drivers and a fishermen. According to the Arts Council, it is part of a Maine Bicentennial mural project to celebrate Skowhegan’s rich history and paint a positive vision for the future. The painting was originally installed on the side of Skowhegan Savings Bank, but the bank objected to the panel featuring the strikers and asked for it to be removed on Wednesday, so the artist and arts council agreed to instead install it on the nearby Space of the River at the bank's expense.

The artist says he was drawn to the project because it invited artists to focus on the city’s history and heritage, including the woods products industry. He said that he had always wanted to do a mural of a log drive in Maine, but was never able to get his proposals accepted until now.

“This wasn’t originally conceived as a labor mural per se. I kind of let it have a life of its own,” said Carlisle. “A large part my attraction to this project was the chance to create a very dynamic composition of guys thrashing it out with a log jam on the Kennebec. The next thing that came to me was that the women have to have their due in this. I can’t just leave it with guys battling on the river.”

While reading about Skowhegan’s labor history he learned about the textile strike of 1907. The strikers, who were mostly women and members of the radical Industrial Workers of the World (IWW), protested against a rescinded wage increase and the firing of 17-year old union organizer and sewer Mamie Bilodeau who had complained of sexual harassment by a mill supervisor.

They demanded an increase in wages, the dismissal of an overseer they accused of sexual harassment, the abolition of fines for workers, and workers’ representation on an arbitration committee. After a three month strike, the workers won a number of their demands including an end to fines for imperfect work, the abolition of piece work wages, recognition of a union-elected grievance committee and reinstatement of forty-two workers who had been fired for union activity.

As Carlisle completed the second scene of the IWW women, he realized that his theme had become “Together we can do it.”

Carlisle emphasized the importance of telling history in public art because it makes it more accessible to people who wouldn’t ordinarily set foot in a museum or art gallery.

“A lot of people don’t come from that frame of reference and so this is bringing the art right to them,” he said. “If they’re going to a courthouse or they’re walking down the street, there it is. Bam. They have to confront it and they have to process it. It’s a very public thing and in some ways more public than a gallery.” 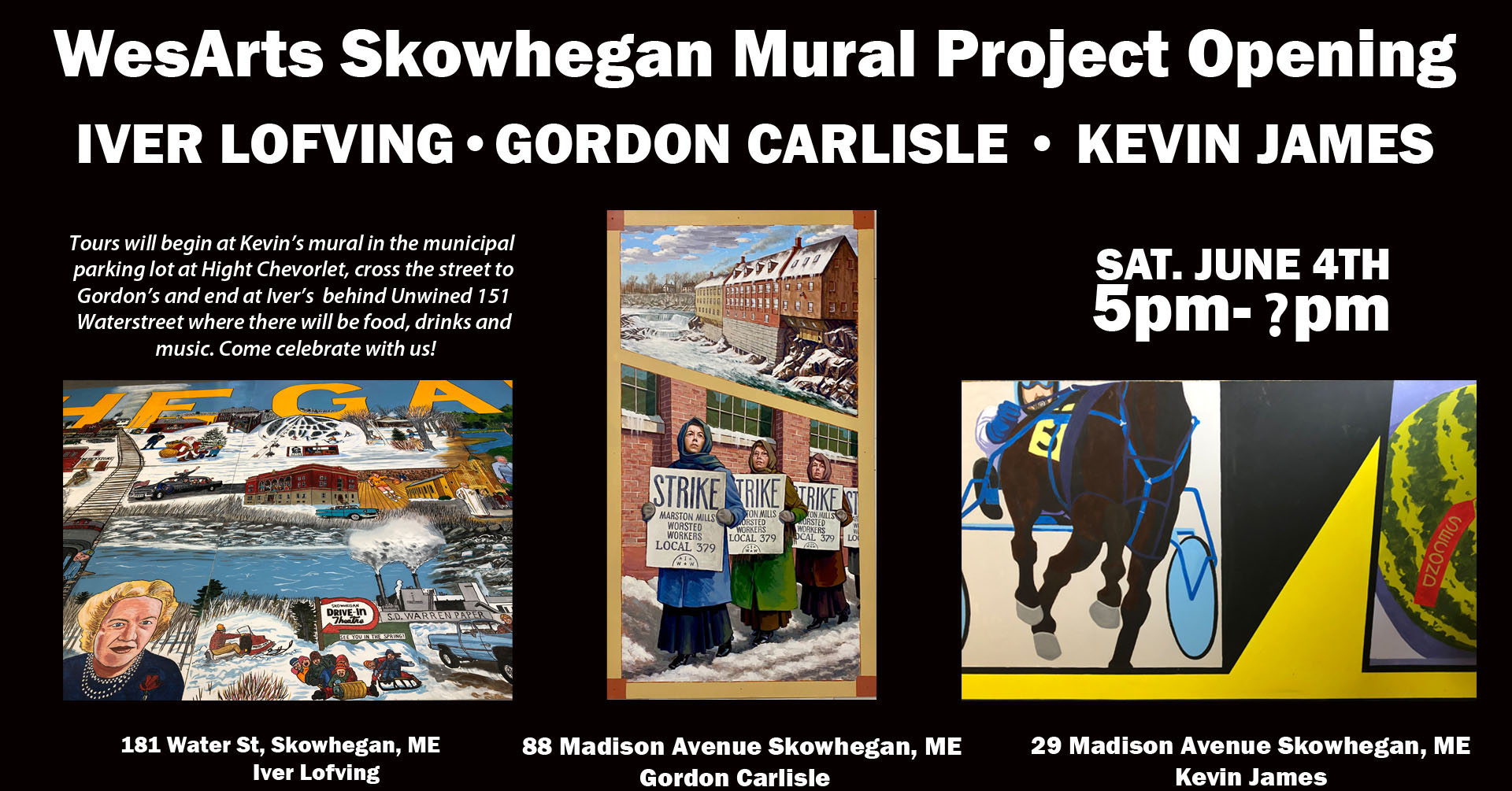