Last fall, James hit a crisis point in his life. The 31-year old LIUNA 327 member, whose name has been changed to protect his privacy, had long struggled with substance use disorder. But now he was facing up to a year in jail after being arrested for possession of methamphetamine. He had known for a long time that he needed to seek help for his addiction, but had been unable to pull himself out of his downward spiral.

Six months later, James is now sober and ready to resume his life, thanks in part to the support of his union brothers and sisters in the Laborers’ Union. After James checked himself into a detox facility in New Hampshire following a short stint in jail after his arrest, fellow union member Jon Ashwell, a peer support specialist with the union’s Laborers Escaping Addiction Now (LEAN) program, reached out to explain about the union’s program to help members with mental health and addiction problems.

Ashwell helped find a treatment program for him in Massachusetts and the Laborers Health and Welfare Fund has paid for his recovery ever since. Fortunately, the court chose not to sentence James to further jail time so now he can focus on staying sober.

“Now I’m healthy, I’m feeling good and I go to meetings,” said James. “I’m genuinely happy now without drugs or alcohol. Pretty soon I’ll be going back to work with the union and I’m a completely different person than when I started this process.”

Having the support of his union brothers and sisters was an important part of maintaining his sobriety. Previously he worked at non-union residential construction companies where substance use issues were usually ignored until it affected one’s work. But there were no company programs in place to help workers seek recovery.

Building trades unions, the Professional Firefighters of Maine and IAM Local S6 at Bath Iron Works are a few of the unions in Maine that run Employee Assistance Programs (EAPs). Union EAPs help members with a range of problems from drug and alcohol addiction to mental health issues, stress, financial problems, marriage difficulties and other issues that historically were left up to individual workers to sort out on their own.

“We’re all peers,” explained Ashwell, who has been in recovery himself for 13 years. “What we bring to the table is that we worked in the field as Laborers and we’re also in recovery ourselves.”

An estimated 15 percent of all construction workers suffer with a substance use disorder, compared to 8.6 percent of the general population of adults, according to data from the National Survey on Drug Use conducted by the Substance Abuse and Mental Health Administration. The days are long and the work is challenging both physically and mentally, so some workers use drugs and alcohol to cope with stress or self-medicate for physical pain. Workers in the trades who are prescribed opioid painkillers for work-related injuries may also be susceptible to addiction. Construction workers represent 25 percent of fatal opioid overdoses among all workers.

“We’re talking about an industry where it was really common to get high and be intoxicated on site and people used to protect that,” said Ashwell.

The Laborers Health and Welfare Fund founded LEAN in 2018 to tackle the opioid epidemic head on by offering peer-to-peer recovery support and referrals for a range of options including detox, intensive outpatient, 12 step, smart recovery, sober living and medication-assisted treatment (MAT).

Peer recovery specialists can also be very hands on if the patient needs more support, whether it’s visiting members in recovery, attending 12-step programs with them or helping family members navigate the program and teaching them how to administer the opioid reversal drug naloxone.

Traditionally there was not much social awareness about addictions on job sites and often intoxicated workers were shuffled to a trailer to sleep it off or were sidelined while other workers covered for them. However, the spike in opioid-related deaths in recent years has forced both employers and unions to take more proactive measures.

Most importantly, these union EAP programs are strictly confidential so when union members seek help, word doesn’t get back to contractors or even the business agents. Often members are reluctant to seek help from a company medical team for fear of losing their jobs. Stewards play a key role in helping members immediately access treatment as they know their crew and often recognize warning signs before management sees them.

Programs like LEAN stress that there are multiple pathways to recovery and there isn’t just one way to stay sober. Perhaps the biggest challenge, says Ashwell, is the stigma attached to substance use disorder.

“People have an idea of what an addict is, what they look like and what they do. We remind people all the time that it’s usually someone’s father, son or brother or mother, daughter or sister,” he said. “We try to remind people that insurance companies recognize alcoholism and addiction as a disease and it’s not a moral failing.” 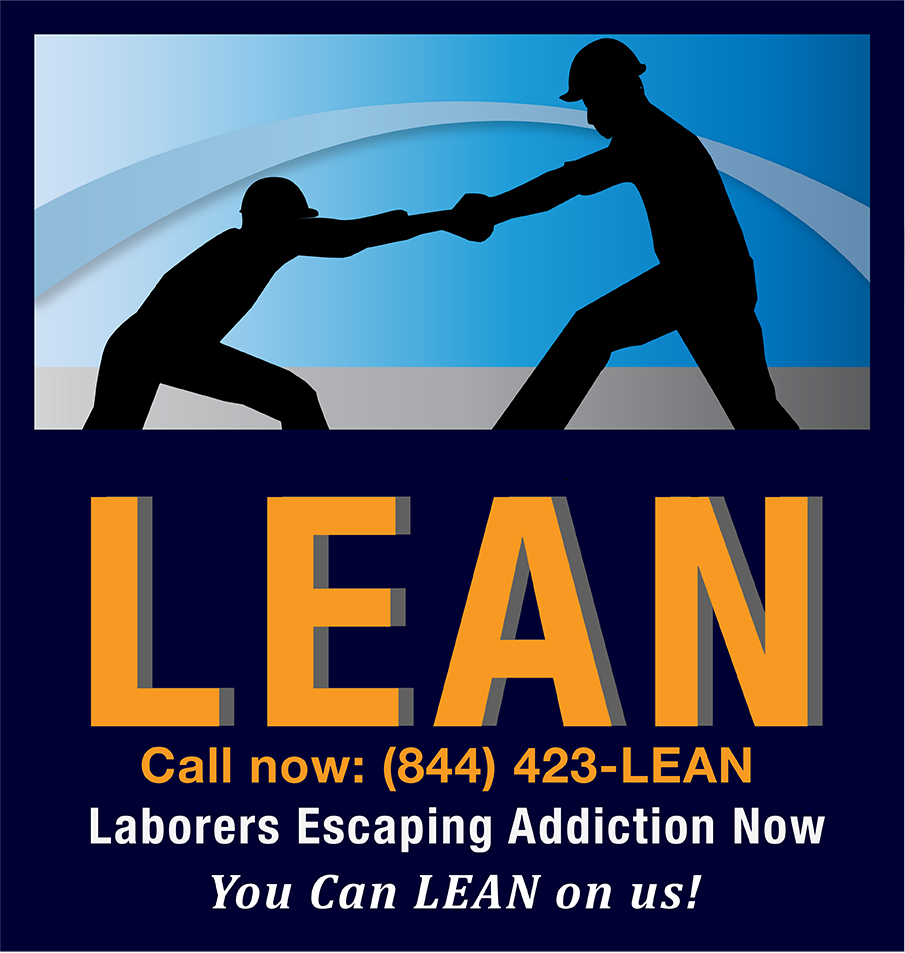 The most important aspects of successful union recovery programs are solidarity, connection and compassion as addictions feed on feelings of alienation, disconnection and despair. Since the pandemic began, the Laborers have been holding their peer recovery meetings on Zoom where members from all over New England run the meetings, support each other and exchange phone numbers. By building a sober community within the union, it reinforces solidarity and connection for members in recovery. For James, the LIUNA 327 member, reestablishing a connection to people who care about him and want him to succeed has been a critical part of the recovery process.

“It might start out as a social thing, but as the disease progresses it gets worse and worse. Most of us end up alone, completely isolated, depressed and being miserable high and miserable sober,” he said. “Once you start reaching out and meeting people around you who have had similar struggles, you realize you’re not alone in this. It’s basically the key component in getting to the other side.”

Although he still has days where he thinks about using again and has had a few very brief relapses since beginning his journey, James says he doesn’t feel the same intense cravings for drugs and alcohol. He doesn’t find himself obsessively planning to get high like he did before.

"All of those thoughts, even when they pop into my head, they don’t have hooks in me anymore,” he said.

It’s been over two months since James had his last relapse and he’s now doing his commitment to sobriety where he will share his experience with other people in recovery and explain how the program has given him the strength and hope necessary to maintain it.

“If you are committed to your recovery, you are more in tune with what is happening in your life. You are more likely to prevent a relapse as well,” he said. “I’ve been getting really good support from my treatment program and the health benefit fund has paid for all of it. The Laborers are here to make sure that I’m where I need to be. By getting sober I can not only be a good employee for them, but I can also live a good life for myself.”

If you are a union member suffering from an addiction, mental illness or other condition, reach out to your union and see if there are similar programs available to you. There is help out there.

Editor's note: Does your union run an Employee Assistance Program or do you have these programs in your organized worksites?  Let me know if you do - andy@maineaflcio.org  We'd like to highlight more of the good work unions are doing on these issues.